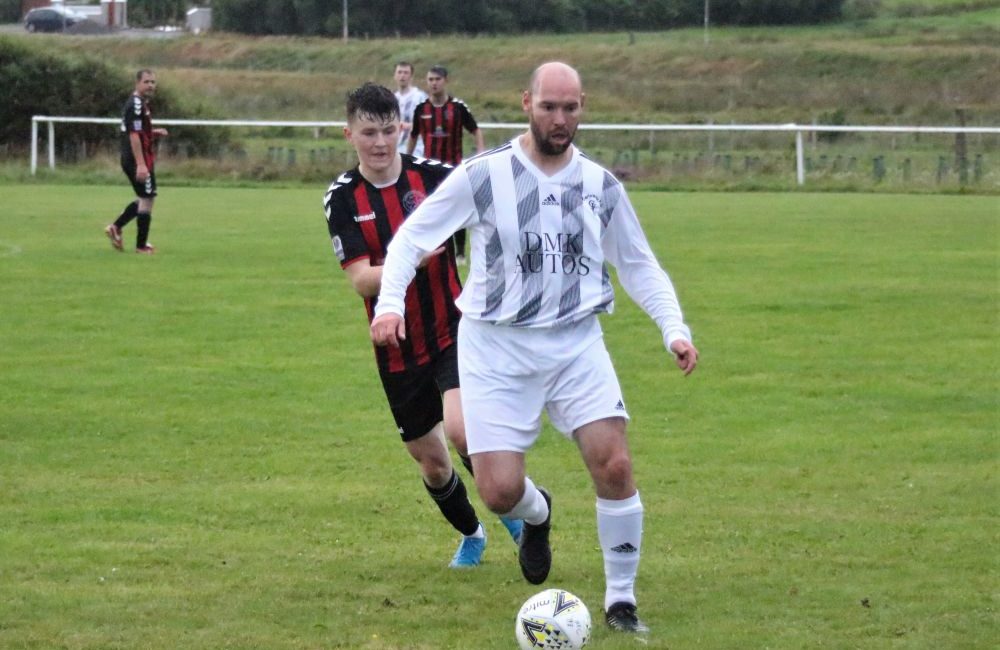 Carloway legend Domhnall Mackay made his 400th appearance for the club last night (Friday 13th August) in the game against Harris. Domhnall’s debut for Na Gormaich came on 12th April 2002, also in a league game at home to Harris, and it was obvious in that first season that the club had discovered  a special talent. Domhnall continued to represent the blues on return from University and became club captain as the club started to challenge for honours. Equally at home at centre-back or in centre midfield, Domhnall’s strength, technique and leadership were pivotal in the transformation of the club and he would lead the club to nine trophies between 2012 and 2017.

In 2012, he captained the club to victory in both the Co-op Cup final and the Moldova Lewis Cup finals, scoring in the penalty shoot outs which decided both games. Domhnall therefore became the first Carloway captain to lift a major trophy in 55 years and followed this up by leading Carloway to their first ever Lewis and Harris League title in 2013. The following year Carloway played Avoch in the Highland Amateur Cup final at Inverness Caley’s stadium and, despite a narrow defeat, Domhnall’s class shone through and he was awarded the man of the match award after a commanding performance at centre-back.

He would go on to lead Carloway to their first ever Eilean na Fraoich Cup win in 2016 and scored in the 2017 final as the club retained the trophy the following season. Leading the team to a second league title that year cemented Domhnall’s reputation as a Carloway great and he continues to serve the club with distinction on and off the park. In addition to captaining the club, Domhnall has previously been coach and assistant manager of the senior team, manager of Western Thistle u16s and has taken on multiple roles as a committee member.

400 appearances, 50 goals and 30 assists is some achievement and hopefully there’s more to come!